Choosing the appropriate 4.6-liter block for a race or performance application is not too challenging of a proposition. We at Sean Hyland Motorsport (SHM) have successfully used the ‘96-‘98 Cobra aluminum block as a basis for drag-race engines of up to 1500 hp. This block, part number F6LZ-6010-AB, was also used in the ‘93-‘98 Lincoln Mark 8. Originally this block was cast in Italy by Teksid, a supplier to Ferrari and other manufacturers. The block is cast in SAE 319 modified alloy aluminum before it is heat treated and aged to achieve the desired characteristics. Overall, we have achieved good results with this lightweight (85.40 lbs) alloy block, as long we use care in its preparation. In 1999, Ford changed the main cap detail, eliminating the jackscrews that preloaded the side of the main cap. They also changed the width of the cap, and switched to a different side bolt with a higher torque value. The diameter of the hole for the knock sensor was also changed from M8x1.25 to M12x1.50. We simply drill and tap these holes if we are using the ’99-up block in an earlier chassis.

In 2001, Ford changed the design of the block to a lighter-weight (80.40 lbs) casting utilizing SAE319 modified alloy, incorporating some interesting design changes. This block is known as the WAP (Windsor Aluminum Plant) block. The oil drain-back holes were changed to keep the oil as far away from the crank as possible, and the main bearing web area was changed to create a beefier structure. 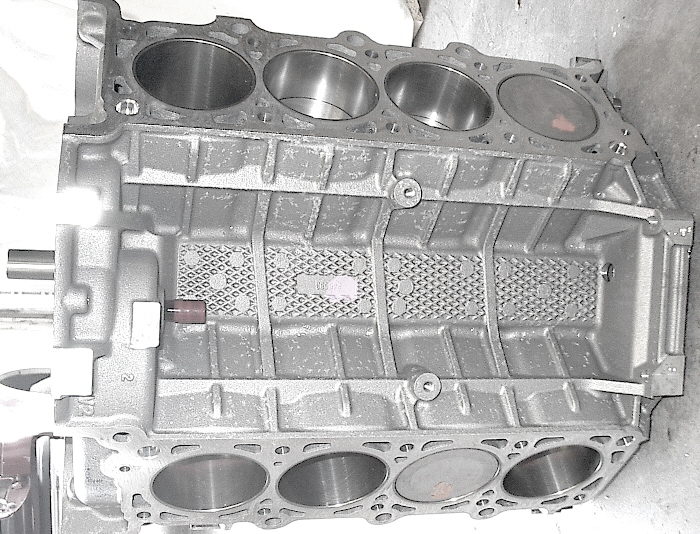 The WAP block above has been cast at Windsor Aluminum Plant since 2001.

Extra external ribbing detail also contributes to a beefier appearance, although the lighter weight means that the extra ribbing has been added to compensate for a reduction of section thickness in the case. The NVH (noise, vibration, harshness) block is a derivative of the WAP block, but features
a thicker pan rail for decreased noise. This seems to be the current block in production on the Marauder. At this time, we have not used the later block for any extreme horsepower applications, and some attempts by others have resulted in block failure. Our recommendation is that the early block is the best foundation for power levels above 900 hp, although the later block certainly should be adequate for moderate power levels of up to 600 hp.

at Play in San Diego, CA